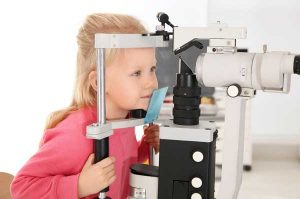 New methodologies and protocols for the eye industry are rapidly changing just like other industries due to new technology, training, and education.  For the past few years, when eye care professionals attend many continuing education courses on glaucoma, there is one relatively new term they may hear: Corneal Hysteresis.

Corneal Hysteresis is a value that tells us the “shock-absorbing ability” of the eye and it is measured by an Ocular Response Analyzer. A CH below 10 is said to below, that is a bad thing. A CH of above 10 is said to be high, that is a good thing. “Essentially, eyes that are good shock absorbers (high CH) are less likely to develop glaucoma and less likely to experience glaucomatous progression. Conversely, eyes that are poor shock absorbers (low CH) are more likely to develop glaucoma and [have] disease progression. CH reflects how an eye responds to stress (elevated IOP) and whether the eye experiences the brunt of that stress (low CH) or is able to dissipate the energy and protect the optic nerve (high CH).”

Eye doctors are taking CH into account more frequently in recent years when managing a patient’s glaucoma. Some have even gone so far as to say it may bring down the long-reigning Goldmann Applanation Tonometry (GAT) as the gold standard of care to consider when managing a patient’s glaucoma. Most patients recognize GAT as “the blue light” test that doctors do after putting those “sticky, stingy yellow drops” in their eyes. GAT “has been used for nearly 70 years and is considered the reference standard for IOP [eye pressure] measurement” but technology has advanced and perhaps CH, corneal compensated IOP (IOPcc) and the Ocular Response Analyzer could quite possibly become the new fan favorites.

Whatever tests eye care professionals deem as the best to use to help them screen for and manage glaucoma, one thing is for certain: in order for them to do that test, they first have to get patients in to see them. It is imperative for patients not to skip their annual eye exam.

According to the CDC, “about 3 million Americans have glaucoma. It is the second leading cause of blindness worldwide. Open-angle glaucoma, the most common form, results in increased eye pressure. There are often no early symptoms, which is why 50% of people with glaucoma don’t know they have the disease.”

A somewhat silly but often asked question that eye doctors get from patients is regarding the effectiveness of marijuana in the treatment of glaucoma. Marijuana never has been deemed an effective treatment for those who have glaucoma because although it in some cases has been shown to lower eye pressure by even 45 percent, its duration of action is extremely short lastly at most a few hours. So although it is now legal in 33 states for medical purposes, treatment of glaucoma should never be one of them.

Vision is something that seems automatic from the moment we first open our eyes in the morning to the moment we close them at night, and it is often taken for granted. However, eye conditions that in their early stages are symptomless and painless like glaucoma may strike without a patient knowing. Early detection and treatment are crucial if one wants to fight to keep one’s precious sight.